Tourist farm Mulej is located in a favorable sunny position with a beautiful view of the mountains, near Lake Bled.

Guests have 5 double rooms with extra beds, 3 family rooms and 2 suites, all prices include breakfast.

Excursions in the area

The Mulej Tourist Farm is only 700 meters from Lake Bled and 1 km from the center of Bled. Bled offers many opportunities for sports and recreation, as well as various events.

Great food is grown on the farm where we have a variety of pets that children can happily feed and play with. 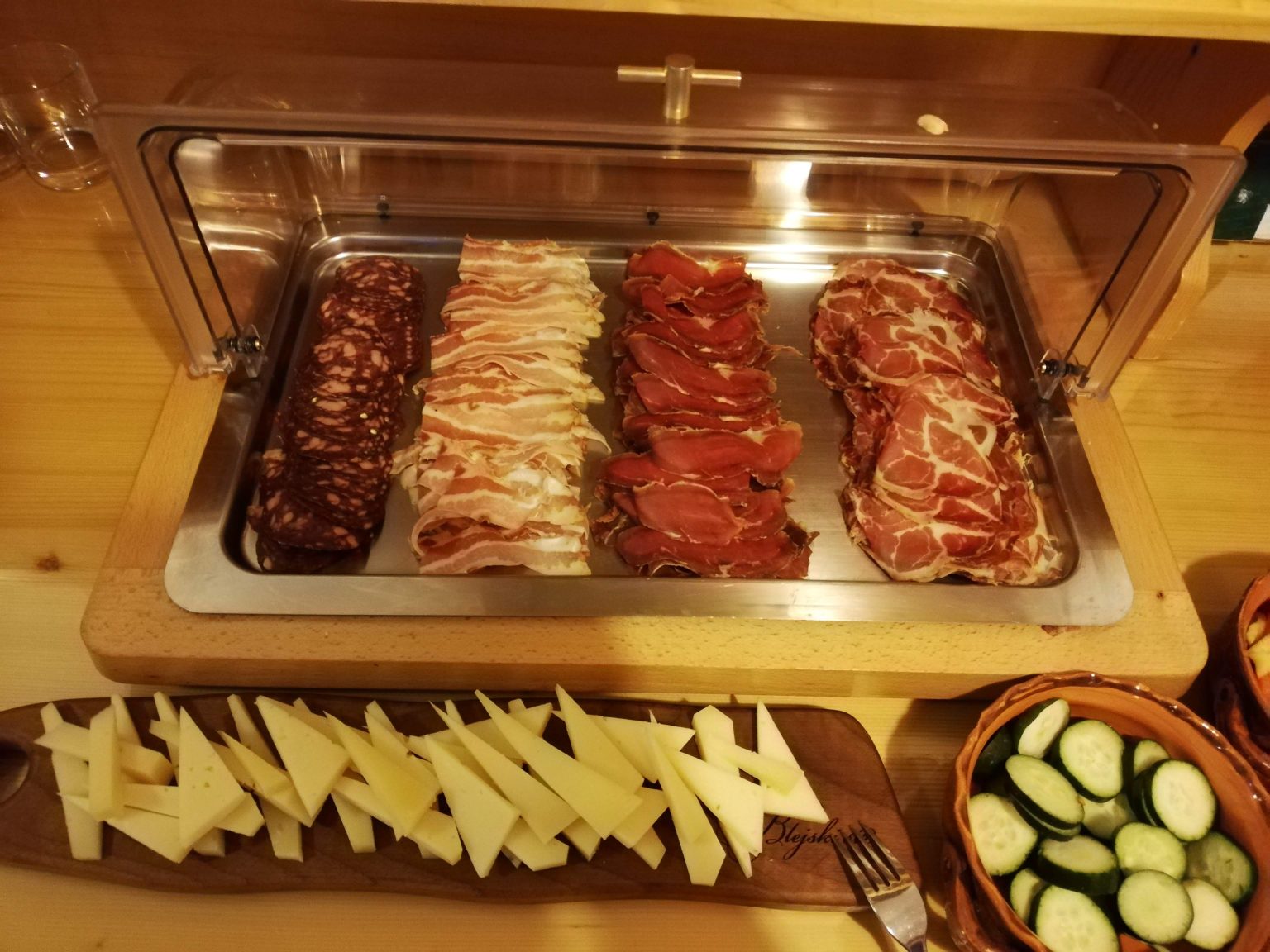 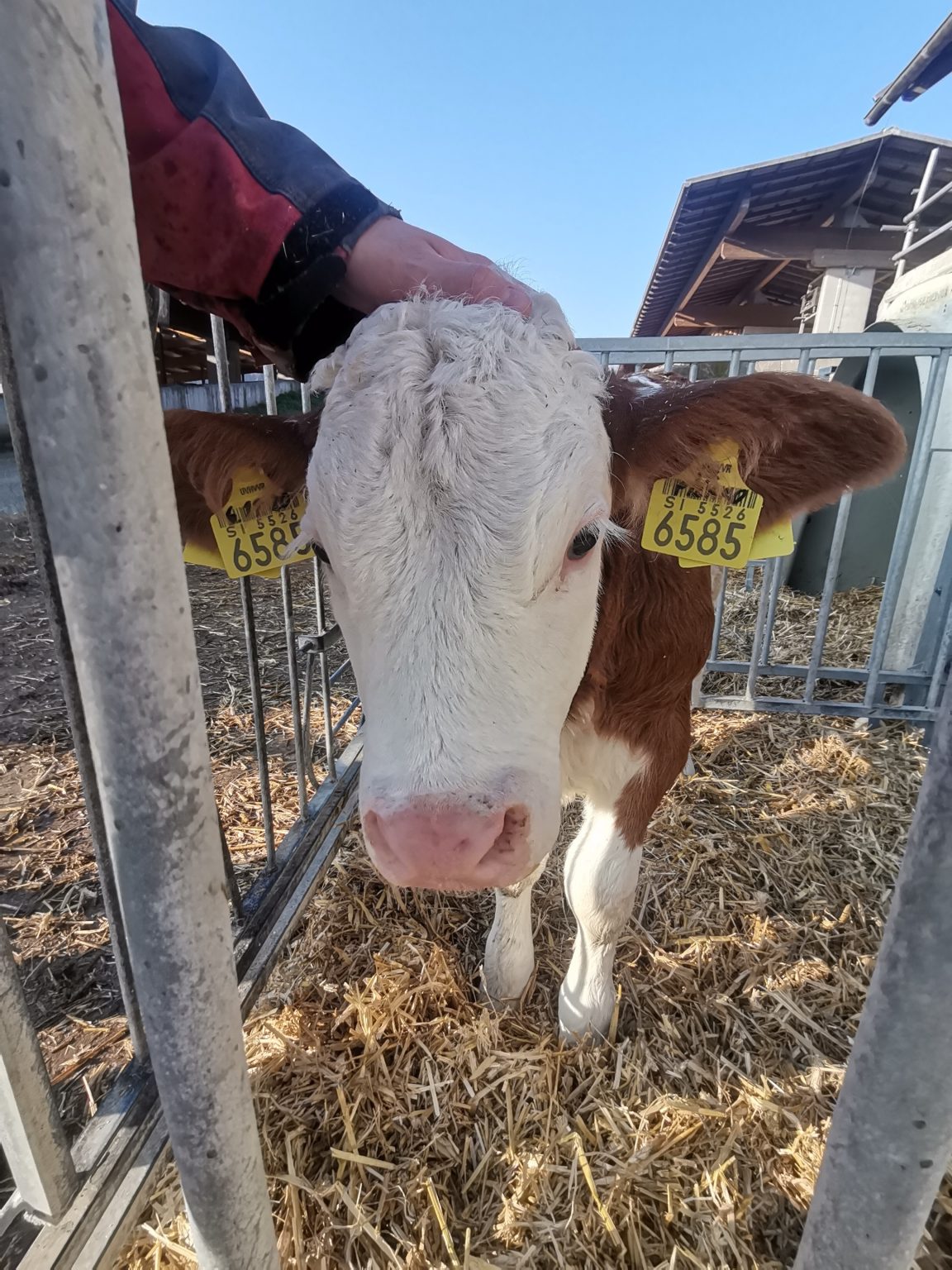 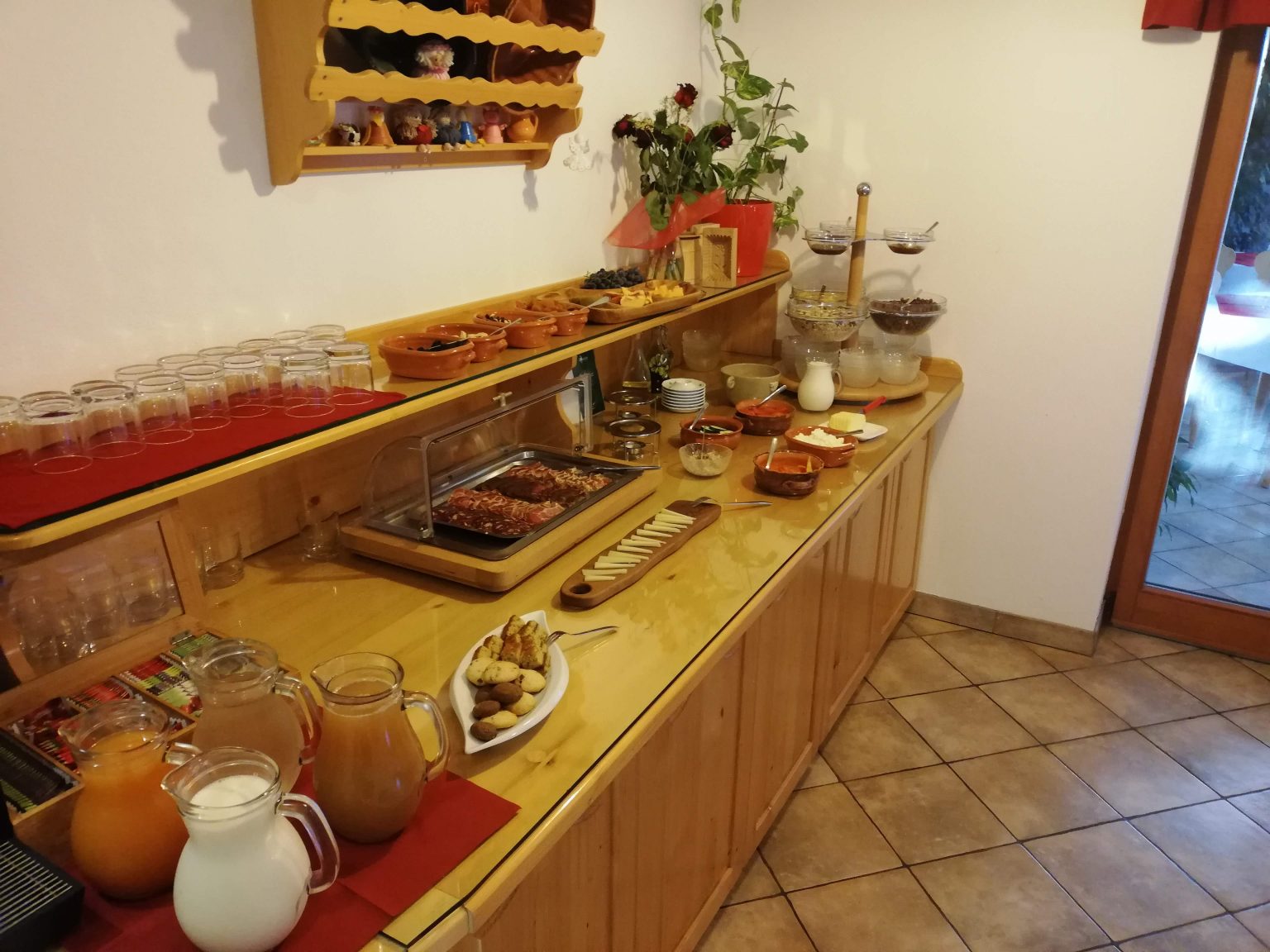 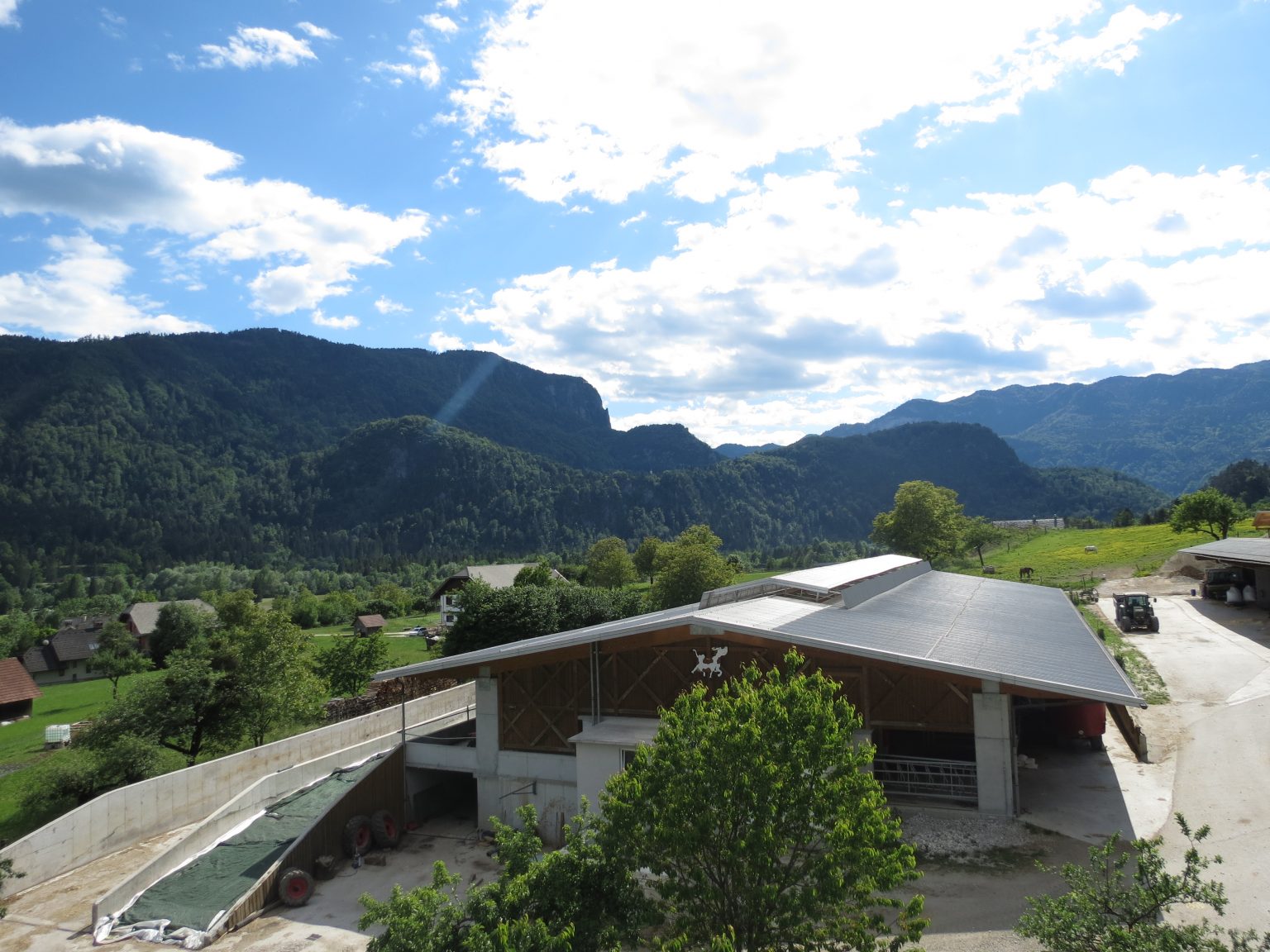 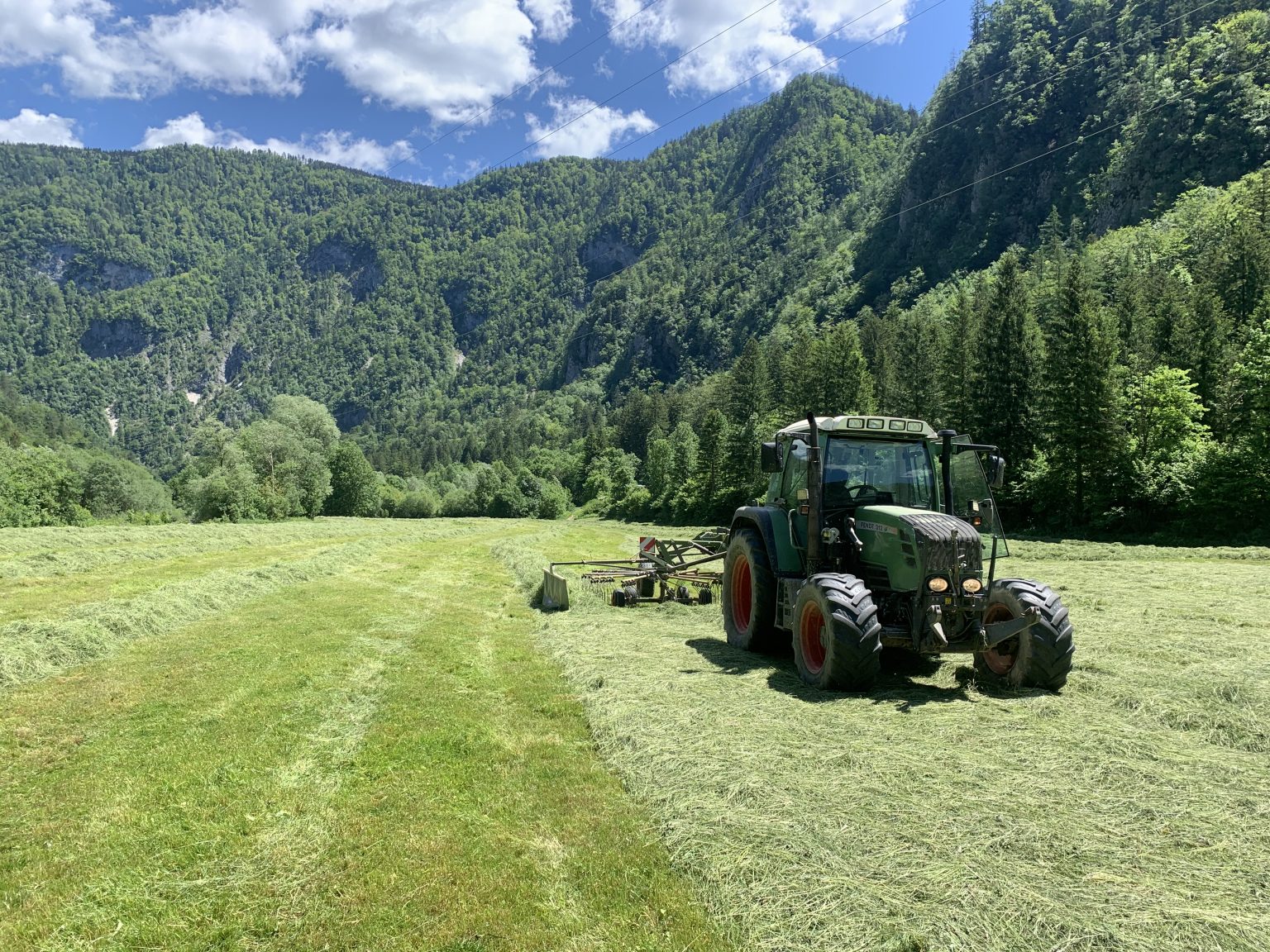 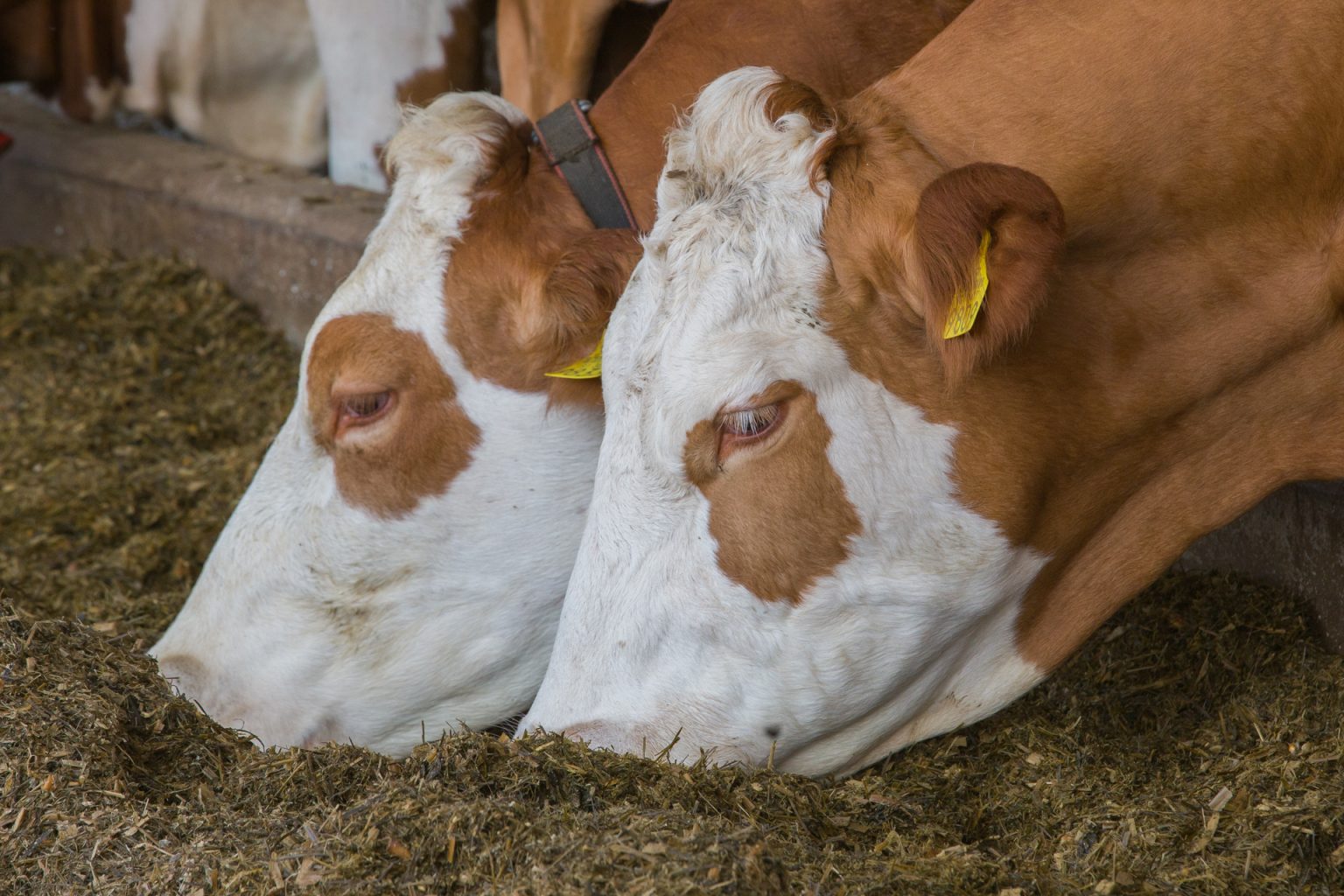 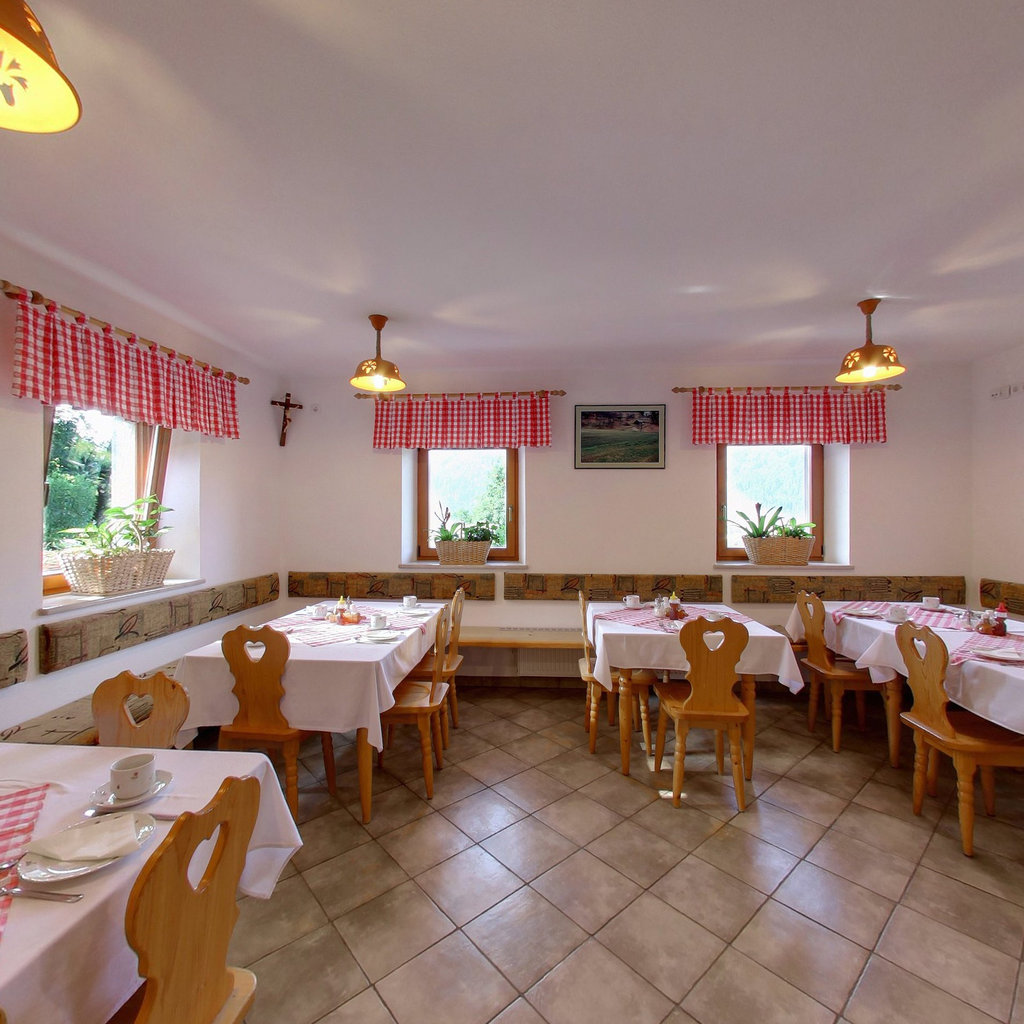 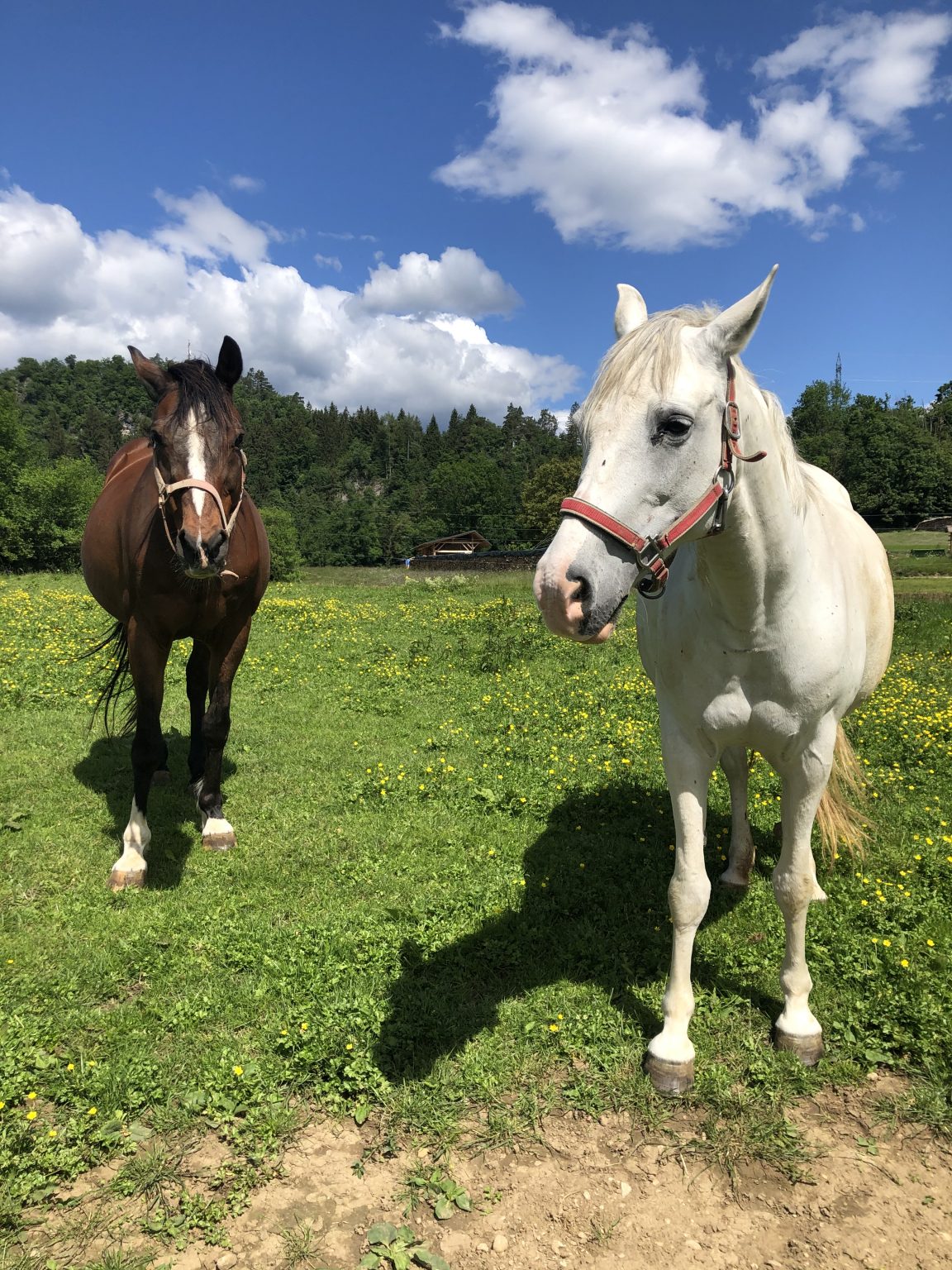 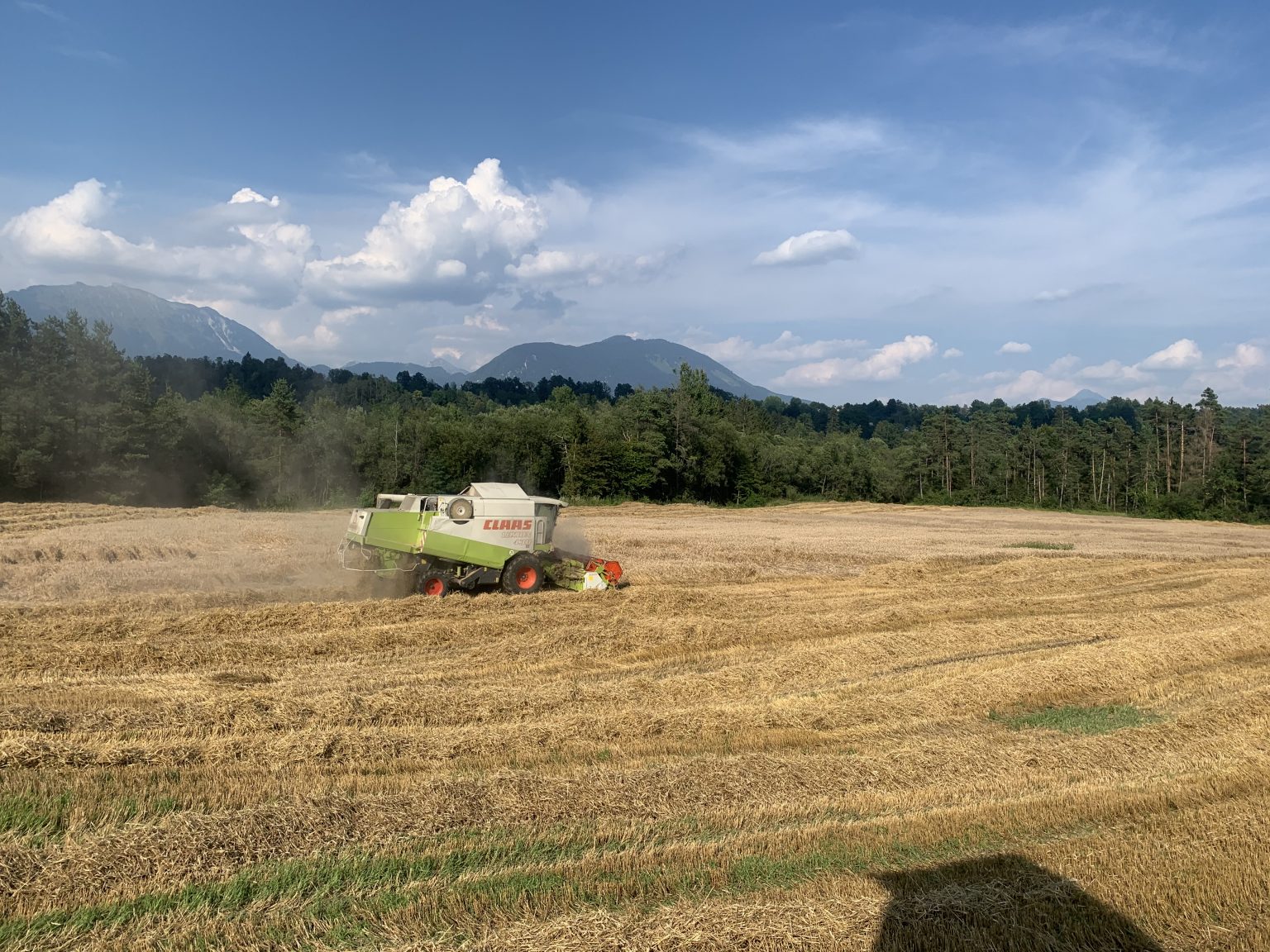 Excursions in the area

The special features of our farm are:

Bathroom Wi-Fi Breakfast The farm A view of nature

We will be happy to offer you hospitality in a new house outside the village, located in a quiet, sunny location with a beautiful view of Jelovica and Babji zob. The new house has eight large double rooms with bathrooms and two extra beds. In addition, we have an apartment for four people. The dining room is intended only for guests who sleep with us.

Bathroom Wi-Fi Breakfast The farm A view of nature

We will be happy to offer you hospitality in a new house outside the village, located in a quiet, sunny location with a beautiful view of Jelovica and Babji zob. The new house has eight large double rooms with bathrooms and two extra beds. In addition, we have an apartment for four people. The dining room is intended only for guests who sleep with us.

Our family, master Jože, wife Damjana, three children Jaka, Manja and Jani, are the proud heirs of the farm Mulej, after the local Stojan farm from Selo near Bled.

The oldest written sources mention eight farms in Selo near Bled in the eleventh century, which were subject to the Radovljica manor. Since, based on the data from the land cadastre and the actual situation in the village, it can be concluded that our ancestors already had a farm at that time, we conclude that these are the first written mentions of our farm.

The oldest member found in the pedigree chain of our family with the surname Mulej, the family name Stojan and the old house number Selo 14 is Anton Mulej, born on January 15, 1692 to father Krištof and mother Jeri. Due to the local name and house number, it can be said with certainty that the location of the old farm Mulej has always been the same, along the road in the center of the village. Ancestors always had male descendants, so the surname Mulej has been preserved at the house to this day. They made a living by farming, raising sheep and cattle, an important part of which was agriculture, as it is still visible today where they all once had fields to grow food for the survival of many families.

More is known about the ancestors than Bartol / Jernej Mulej. 8/18/1821 His first wife, with whom he had five children, died. He remarried and had ten children with his second wife. So a total of fifteen. Fate was cruel, as he drowned in Lake Bled on October 9, 1887. Oral sources report that he resented the wrong people. He was not found until six weeks later when he swam to the surface. He was also the last to know the secret of double floors in our wooden chests. The secret was revealed by my father Janez Mulej on January 2, 1981. During the New Year holidays, he cleaned wooden chests that were once used for dowry and storing various useful things, and before the secrets were revealed, we had grain stored in them. At that time, while cleaning a small drawer of the chest, located in the upper left corner, he discovered that this drawer had an unusually thick bottom. Soon, on the underside, invisible to the eye, he discovered a wooden tab that prevented the opening of the double bottom. When he pressed this tab, the double bottom opened easily and, to his great surprise, he saw in it a crumpled newsprint wrapped and nicely sorted Austro-Hungarian silver coins. In all, there were 62 silver coins made between 1661 and 1765.

The years on the silver coins prove that the money was collected by several generations of ancestors who lived under different Austro-Hungarian rulers. Dad proudly saved his find and is now on display to our guests. The research vein did not give him peace, so he inspected the other wooden chests and in one of them he really discovered that he had the same double bottom as the one in which he found the money. He couldn't imagine finding anything in it, but that's exactly what happened. In the double bottom he found in an old tax receipt written in German Gothic, a wrapped Short Catechism in Slovene from 1838 and a Kolera booklet from 1831 with instructions on how ordinary people can protect themselves and their people from this terrible disease.

The finds are amazing and we protect them as the greatest sanctuary for our successors. We really only show them to people who show a special interest. The next owner of our farm was Jožef Mulej, born on February 8, 1859. He trained to be a stonecutter and was not just a farmer. He had to be especially industrious as he left us many of his products. Two stone tables were installed by my father in 1980 after the renovation of our house in the village in front of the entrance, where they serve their purpose. He also made a huge number of boundary stones, which still mark the borders of our forests today. Namely, he lived in the period of land deprivation, when Empress Maria Theresa distributed the land to farmers on the basis of the size of the barn that each farmer had. Unfortunately, our barn at that time was not among the largest in Selo and we got only 10 ha of land. I can proudly say, however, that our ancestors were already honest and hard-working people, for my great-grandfather, in spite of setting boundary stones, did not work dishonestly in his favor. It is also interesting that Jožef carved his initials on the border stones in the woods. From then on, most male offspring had names on J, so the initials of the successor matched JM as indicated on the stones.

My grandfather, Janez Mulej, born on September 3, 1893, was the next owner on our farm. He went through many hardships in his life. He spent a full seven years in the military. He first fought in the First World War in Galicia and on the Isonzo Front. He was also awarded several times there. He received two medals for bravery, a small silver medal for merit and a large silver medal for bravery. The latter was a real rarity among Slovenian soldiers and he showed it with special pride. After the First World War, he was only at home for a short time, when he had to defend Slovenian Carinthia with the Master's fighters. After this ordeal without a real outcome for Slovenia, he had to serve in the Yugoslav army on a regular basis. Seven years of military service was really too much. He therefore wanted to preserve such experiences in every way possible, and because of his experience in the Second World War, he wanted to navigate through the whirlwind of war as neutral. The farm suffered as it gave food to both sides. He was a respected villager with his wisdom and prudence. Before the Second World War, he built a new barn, the skeleton and roof of which still serve its purpose today, and he also thoroughly renovated the house. When he left the farm to his son, my father Janez, born on September 13, 1932, he proudly said that he was leaving him a well-kept farm without burdens, in which he would not have to invest much. This was true for those times around 1960, but at that time a rapid technological development was still beginning, which did not bypass even socialist agriculture. My father was one of the most advanced farmers, inspired by the competition in Germany and Austria, which was not a deal for many in the leaden socialist times. The first imported a lawn mower, a tractor, introduced a lattice floor into the barn and a dryer on the barn. This has led to constant investment and construction. In 1979, he built an old house in the village for two floors and thus gained space so that we could start engaging in rural tourism. This became the next turning point in the development of the farm.
When my wife Damjana and I took over the farm in 1996, we had to decide how to proceed.

After careful consideration, it became clear to us that the farm has no real development opportunities in a very spatially limited place in the village. Technology, scale, and everything that goes with it must be different from a hundred years ago as productivity progresses and increases. Because of this, we moved the farm out of the village in 1999, in 2004 we built a house for our family and for tourism on a new location, and now we have good chances to be successful in the future in both the agricultural and tourism industries.

RESERVATIONS
We use cookies on our website to give you the most relevant experience by remembering your preferences and repeat visits. By clicking "Accept", you consent to the use of ALL the cookies.
Cookie settingsACCEPT
Manage consent

This website uses cookies to improve your experience while you navigate through the website. Out of these, the cookies that are categorized as necessary are stored on your browser as they are essential for the working of basic functionalities of the website. We also use third-party cookies that help us analyze and understand how you use this website. These cookies will be stored in your browser only with your consent. You also have the option to opt-out of these cookies. But opting out of some of these cookies may affect your browsing experience.
Necessary Vedno omogočeno
Necessary cookies are absolutely essential for the website to function properly. These cookies ensure basic functionalities and security features of the website, anonymously.
Functional
Functional cookies help to perform certain functionalities like sharing the content of the website on social media platforms, collect feedbacks, and other third-party features.
Performance
Performance cookies are used to understand and analyze the key performance indexes of the website which helps in delivering a better user experience for the visitors.
Analytics
Analytical cookies are used to understand how visitors interact with the website. These cookies help provide information on metrics the number of visitors, bounce rate, traffic source, etc.
Advertisement
Advertisement cookies are used to provide visitors with relevant ads and marketing campaigns. These cookies track visitors across websites and collect information to provide customized ads.
Others
Other uncategorized cookies are those that are being analyzed and have not been classified into a category as yet.
SAVE & ACCEPT